Many street-goers seem to have lost their smiles.
Indeed, city dwellers relate to one another less and less and give each-other fewer social interactive signals; our streets are filled with dreamy walkers engulfed under headphones, introverted faces and averted eyes.*
Any accidental interaction with another fellow burgher is likely to be perceived as a mild trespass.
A genuine smile is a small physiological and social miracle that affords both its donor and beneficiary a healthy dose of positive emotions.
I have frequently observed street situations that could easily have been diffused thanks to an exchange of smiles, social smiles that may have become “genuine smiles.” **
It seems the grunt has ousted the grin!
The aim of the event GIVE A SMILE FOR THE NEEDY is to fight this smile depletion situation in our population, and will take place in june as a part of “48 Stunden NeuKölln/Kunst rettet die Welt”. 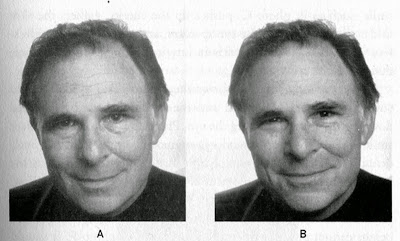 *This mutual obliviousness is further compounded by technologies. As I further observed, commuters all seem to be absorbed by their smartphone/headphones, sheltered from their actual surroundings by some external source of entertaiment/distraction. It is as if our presence within the public sphere has become bereft of its psycho-social dimension, the latter being instead set aside to be shown groomed and dramatised as web-presence. This dissociation of physicallity through technology is rising steadily. For instance, as I have further observed, it has become practically rude to call people on the telephone. Text, instant-messaging, FaceBook/social platforms, Skype and email are gradually replacing telephonic vocal contact in the personal social context: even the disembodied telephone caller is now often perceived as an intruder.
** Genuine/social smile
A Duchenne (or genuine) smile engages the muscles around the mouth and eyes.
While conducting research on the physiology of facial expressions in the mid-19th century, French neurologist Guillaume Duchenne identified two distinct types of smiles. A Duchenne smile (see photo B) involves contraction of both the zygomatic major muscle (which raises the corners of the mouth) and the orbicularis oculi muscle (which raises the cheeks and forms crow’s feet around the eyes). A non-Duchenne smile (see photo A) involves only the zygomatic major muscle.“Research with adults initially indicated that joy was indexed by generic smiling, any smiling involving the raising of the lip corners by the zygomatic major. (...)
More recent research suggests that smiling in which the muscle around the eye contracts, raising the cheeks high (Duchenne smil- ing), is uniquely associated with positive emotion.”
The Pan Am smile, also known as the “Botox smile”, is the name given to a fake smile, in which only thezygomatic major muscle is voluntarily contracted to show politeness. It is named after the airline Pan American World Airways which became defunct in 1991, whose flight attendants would always flash every jet-setter the same perfunctory smile.
Source: http://www.medicaldaily.com/